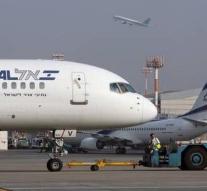 jerusalem - The time that Israeli women in El Al's plane had to leave their seat because an orthodox Jew did not want to sit next to them is over. Until recently, the flight attendant could first request the female passenger and, if necessary, force her to give up her seat.

The 82-year-old advocate Renee Rabinowitz came across that in 2015. She refused, after which she finally had to give up her place. Rabinowitz responded with a complaint against the Israeli airline about discrimination against the judge. That gave her right. El Al also has to pay her a reimbursement of around 1650 euros.

El Al told The Guardian that the company would respect the judgment of the judge.