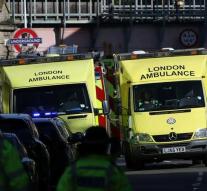 london - The attack in London has certainly yielded eighteen victims. That confirms the ambulance service. None of them is in a life threatening condition.

'We were alarmed at 8.20 pm and arrived at the destination within five minutes,' said a spokesman for the ambulance service. 'We are extremely busy, and ask for a call in absolute emergency situations. '

On Friday morning a suspected explosion occurred in a London subway. Eyewitnesses have seen a 'fireball' or 'stabbing flame'. Many victims would have burns, but in the chaos that occurred after the attack, they were probably also injured.

Thus an eyewitness describes how she lay on top of two ladies on the bottom of the stairs. Next to her, a boy clenched his head on the concrete.