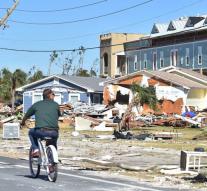 mexico beach/marianna - The death toll by the devastating hurricane Michael in the southeast of the US has since risen to eighteen. Of hundreds of people is still unknown where they stayed, the authorities reported Saturday. Hundreds of thousands of people were evacuated before the hurricane came ashore, but not everyone left on time.

Rescue workers search for possible victims in numerous heavily damaged places such as Mexico Beach and Panama City on the Gulf of Mexico in northwestern Florida. But also around 100 kilometers inland in Marianna the damage is huge according to local media.