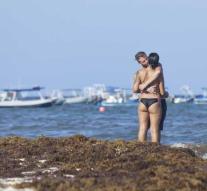 cancún - In the Mexican tourist resort Cancún, a fabulous tourist peninsula with white sandy beaches and grotesque hotels, eight (!) Bodies have been found in recent days of people who have been killed by violence. Some of the remains were in plastic bags.

In the trunk of a taxi, the bodies of a man and a woman were found, reports the television channel Televisa. A man was also shot in his hammock.

Furthermore, a person who has been beheaded has been found near the motorway between Cancún and Mérida. The sun, sea and beach walhalla of yesteryear is gone.