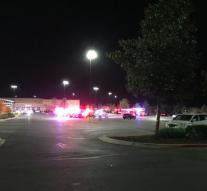 san antonio - In a car park at a Walmart office in San Antonio (Texas) eight bodies were found in a truck. At least twenty other people have been taken to hospital, some in critical condition. Probably it's about immigrants.

A total of 38 people were found. Survivors would struggle with undercooling phenomena. Among the victims, there would also be some children. The other people found would be between 20 and 30 years old.