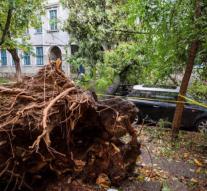 boekarest - Heavy weather, accompanied by wind speeds of 100 kilometers per hour, took a tragedy of destruction by western Romania. Eight people, according to the emergency services, were injured and at least 67 others injured.

Road and rail traffic in the region came to a halt by unrooted trees. The roof was demolished from several hospitals, schools and homes. Dozens of cities and villages came without electricity and some also without tap water.

'Against the weather is not a fight,' said Prime Minister Mihai Tudose on television. 'The entire medical sector is focused on wound care. 'The government promised to help the affected congregations. The mayor of Timisoara, Nicolae Robu, said about the situation in the city that he had never seen before. 'There are even lorries swirled around'.