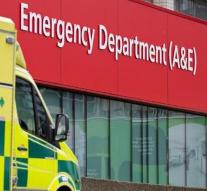 london - Eight people are killed in a collision between two lorries and a van on the M1 motorway, 80 kilometers northwest of London. Another four people were injured in the accident that occurred at 4:00.

The tragedy of the accident is not clear yet, but the vehicles are in the same direction. Two men were arrested for dangerous driving.

It is extra busy on the British roads this weekend because Monday is a holiday and there are many festivals and events throughout the country.