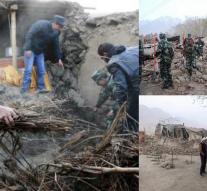 peking - On an earthquake in northwest China, eight people were killed in the city of Taxkorgan on Thursday morning. Another eleven people were injured, state government agency Xinhua said. The earthquake had a power of 5.5 and shook parts of the Xinjiang Autonomous Region.

After the quake, some aftershocks followed. The wounded were taken to the hospital. Taxorgan is located near the Pakistani border.