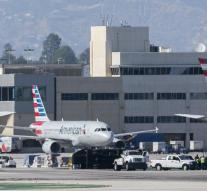 The accident happened when the wing of a newly arrived Boeing 737 from the Mexican airline Aeromexico hit the vehicle, dropping the truck over.

All wounded in the truck. On board the plane there were no injured persons. Also, no fire has broken out, report the airport's emergency services. Anyone who made the mistake that caused the accident is not known yet.