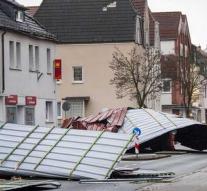 berlin - The heavy storm that drew on Germany on Thursday also claimed eight lives there.

Two men were killed in the eastern state of Saxony-Anhalt, the police reported Friday. The six other victims fell in the states of Brandenburg, North Rhine-Westphalia and Thuringia as a result of the storm, which in German media hurricane Friederike is called.

According to the German weather services, it was the worst since the storm that crossed Europe exactly eleven years ago and was called Hurricane Kyrill in the Federal Republic.

Three people were killed in the Netherlands. A 62-year-old man died in Enschede after a tree had landed on his car by wind, while in Olst a similarly 62-year-old truck driver from Zwolle died, presumably when he stepped out of his car to remove a branch that had fallen on the road. lay away. Just at that moment another branch broke off. In the Gelderse Vuren a 66-year-old man died when a plexiglas construction came down.