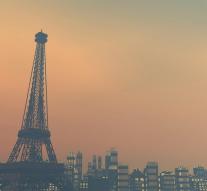 - The Eiffel Tower in Paris was opened Monday, as the main attraction had been closed for more than two days as a result of the attacks in the city. This has been reported to the administrator.

The Eiffel Tower was over days inaccessible, like several other tourist hotspots in the city. So too were the doors of the Louvre and EuroDisney closed.

The tower is sure to Wednesday evening illuminated in the colors of the French flag : red, white and blue. The motto of the city, Fluctuat nec mergitur (She staggers but does not perish), will remain projected on the tower.