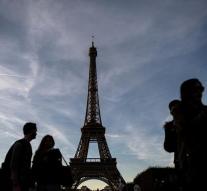 - In sympathy with the fate of the torn Syrian city of Aleppo go the lights on the Eiffel Tower Wednesday at 20.00 hours. This announced the Mayor of Paris, Anne Hidalgo, Wednesday. Paris thus supports the residents of Aleppo who have to live under intolerable conditions, said Hidalgo, calling for action.

In the tower, there was little action Wednesday. It is the second consecutive day of a strike by staff of the attraction that draws six million people annually. Staff alleges that the management of the Exploitation of the Eiffel Tower (SETE) lack of clarity, lack of social dialogue and non-compliance with agreements made.

Among the three hundred workers, there is fear of layoffs. The boss at SETE, Anne Yannic said to have more than fifty complaints were received in its ' unreadable and incomprehensible. '