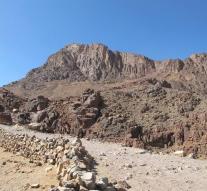 ismailia - Nine Egyptian police officers were killed by an attack in Sinai on the convoy in which they drove. Four others got injured. The responsibility for the attack has not been claimed.

In the area, Islamic state terrorists are increasingly active.

The bomb attack was carried out near Arish, the main city in the north of the peninsula. Three armored vehicles were lost, as well as a truck with material. According to the MENA news agency, security forces became involved in a firefight with militants after the attack.

One of the injured is a brigadier general who lost a leg during one of the explosions.