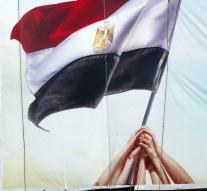 - Security at the Egyptian border in the north of the Sinai Peninsula on Monday five Sudanese refugees shot. It has informed the Egyptian army.

" Border Guards saw at dawn a group of Africans who help criminals trying to sneak across the border. " There followed an exchange of fire, leaving five people died and six others were injured. Five people were arrested unharmed.

In the north of the Sinai Islamist insurgents are active already hundreds of soldiers and officers have slain.