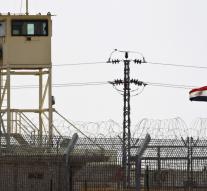 - Egyptian security forces have killed 24 militants in the Sinai. That's what security sources said. The militants were part of an affiliated group Islamic State in Egypt.

According to sources, they were shot at 70 kilometers from the place where recently a Russian passenger plane crashed. The militant group has claimed responsibility for the crash with the device. All 224 passengers arrived at the crash killed.

The militants have been killed, according to the sources while they were hiding in a cave in the mountains. There are also eight militants were arrested.