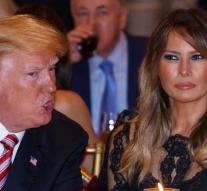 washington - On the Wikipedia page of Donald Trump last Thursday a picture of a penis. His usual portrait photo was replaced by a male genitals by internet users, after which an online war erupted, a Wiki editor reveals today.

Normally an official White House portrait is on Wikipedia, where Trump poses for an American flag. That was different on Thursday, people who used Apple assistant Siri noticed.