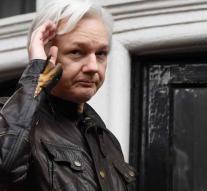 quito - The president of Ecuador, Lenin Moreno, has decided that the extra security that is stationed at the embassy in London is immediately lifted. At the Embassy of Ecuador, Wikileaks founder Julian Assange has been living in exile for almost six years. For example, the Australian tries to prevent extradition to Sweden, where he has been charged with assault.

'From now on there will be normal security, just like in the other Ecuadorian embassies', says the government statement. about the embassy in Great Britain.

Ecuador closed Assange off the internet last March, after giving political comments via Twitter. President Moreno has already described the situation around Assange as 'a stone in his shoe. '