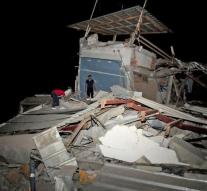 - At least 28 people have been killed in a powerful earthquake off the coast of Ecuador. The death toll is likely to rise further. Saturday night around 20:00 (local time) an earthquake was of magnitude 7.8 on the Richter scale measured.

Social media appear images of different buildings that have collapsed in Ecuador, including a bridge in Quayaquil and a tower at Manta airport. The quake came to sit part of the capital of the South American country without power.

The epicenter was just off the coast at a depth of nineteen kilometers, about 170 kilometers from the capital Quito. The earthquakes in Japan, where more than forty people were killed, had a strength of 7. 3 and 6. 6.