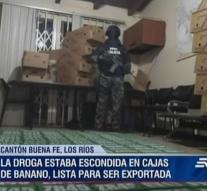 buena fe - The police in Ecuador have intercepted a huge load of drugs on Wednesday, so it was announced on Thursday. No less than 2,600 kg of cocaine was hidden in containers between bananas. According to local authorities, the cargo was on its way to Europe. The Netherlands and Belgium were among the destinations, reported various media in Ecuador.

The police made several seizures in Ecuador on Thursday and arrested seven people. The banana plantation in Buena Fe, where the cocaine was packed and hid, has been watched for a long time. According to the Public Prosecutor's Office, the investigation took six months prior to the invasion.