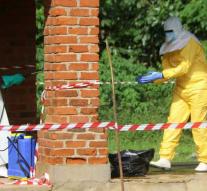 kinshasa - The Ebola epidemic in the Democratic Republic of Congo has entered a new phase. The disease has reached Mbandaka, the capital of the Equateur province. In the urban area, Ebola can penetrate much faster than in rural areas, where the disease had been observed so far.

The World Health Organization (WHO) has sounded a big alarm, now that Ebola has reached a city with more than one million inhabitants. Today the UN organization conducts consultations in Geneva with experts and may announce an international health alarm. This would enable WHO to further increase international assistance. The Ebola outbreak is also on the agenda at the annual meeting of the organization next week.

Director-General Tedros Adhanom Ghebreyesus of the WHO spoke of a 'worrisome development' yesterday. He has already sent a team of experts to Mbandaka to monitor the development of the epidemic. The Congolese Ministry of Health has also sent extra doctors to the city.

They try to map with whom infected people have had contact. In addition, people entering and leaving the city will be monitored more closely, in order to be able to predict how the epidemic will develop further.

Mbandaka is a freshwater harbor that lies on the Congo. This river is one of the most important connecting routes in the country. The disease already seemed to spread along the Congo and now that Ebola has reached an important population center, it is feared that the epidemic will become even greater. Downstream from Mbandaka are the Congolese capital Kinshasa and Brazzaville, the capital of the neighboring Republic of Congo. The WHO is very keen to make no mistakes in the Congolese ebola epidemic. The organization got a lot of criticism after the previous epidemic of the deadly disease, in West Africa between 2014 and 2016. The World Health Organization would have taken too much action at the time. Some 11,000 people died in this epidemic.

That is why the WHO sent an experimental Ebola vaccine to the Democratic Republic of Congo earlier this week. In tests, rVSV-ZEBOV as the name of the vaccine is found to be particularly effective. In experiments during the ebola outbreak in West Africa, the drug protected people completely against contamination. Since then, work has begun on the construction of a large stock for use during a subsequent epidemic.

The use of the vaccine is complicated because it must be stored at minus 60. This is still quite a challenge in the interior of Africa.