Home / World / Eberhard looks from behind the window 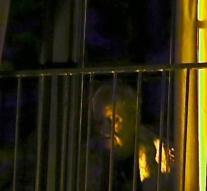 amsterdam - The mayor of Amsterdam, Eberhard van der Laan, for whom a massive tribute was held today for his office at the Herengracht, has slammed the thousands of Amsterdammers behind the window.

Photographer Ferry de Kok saw the seriously ill Van der Laan watching the clapping and singing audience between the curtains and made this moving photo.

Through his wife Femke, the treated Van der Laan, who announced that in January, had sore lung cancer, the many attendees. 'Your mayor had been very happy here, but unfortunately not. Well, he has heard you and he enjoyed it. '

'I would like to thank you very much on behalf of my husband for this beautiful gesture and for all the sweet reactions of recent days', Femke van der Laan continued. 'They are a huge support. Thank you. '