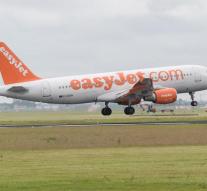 - EasyJet cancels Monday fourteen flights to and from Amsterdam. This is due to the pilots strike announced on Sunday. EasyJet pilots who operate from the base Schiphol, put the work down Monday for the fourth time.

The airline gives in a statement that they were disappointed in the strike.,, We have negotiated up on Sunday and the feedback was positive. We were expecting the announcement of the strike was not in and see it as an unnecessary escalation. '

EasyJet expects to carry out eighty percent of scheduled flights.,, We want to emphasize that we do everything possible to reduce the impact of these strikes our passengers. '


The work stoppage by the Dutch easyJet pilots last Monday from 04. 00 am to 12. 00 pm. Deployment of the strike is a better collective agreement with sick pay, less tiring schedules, more grip on the grid and a better pension.