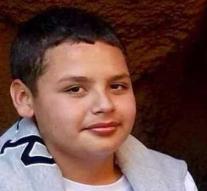 los angeles - A 13-year-old boy has been detained for twelve hours in the sewer in the American city of Los Angeles. More than a hundred firefighters were summoned. 'I have prayed and asked God for help.'

Jesse Hernandez was playing in Grittith Park, where he and his family celebrated Easter. He jumped on wooden planks in an abandoned building, after which he fell almost eight meters down a narrow pipe. 'I did not see anything at all, I only heard the water flowing,' he says in an interview with NBC news.

The raw wastewater flowed through the pipe at a speed of about 25 kilometers per hour. Not only is the sewer full of poisonous gases, the underground system through which the boy was dragged is a big maze. The chance that he would be found alive was therefore not very big.

Read more under the photo.