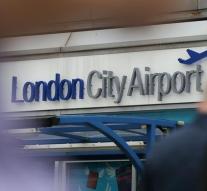 london - London City Airport was evacuated Friday after a fire alarm went off. Certainly 26 people faced according to British media with breathing difficulties and locally treated by ambulance personnel.

The ambulance service in the British capital said that two people were hospitalized. A total of about five hundred people had to leave the airport, reportedly because of a chemical incident ' '.

A 35-year-old passenger told the BBC that he had just left his plane when he heard the alarm. ' It was announced in three languages ​​that there was a fire, '' said the man. ' We are all now take shelter under the wing of the airplane because it's raining. ''