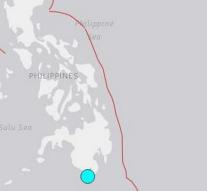 manila - An earthquake with a force of 7.2 hit the Philippines on Friday on Friday. The shock, later adjusted by the American Geological Service to 6.9, was best felt in the south of the island of Mindanao. There is nothing known about damage.

The epicenter was located on the coast of the city of General Santos. A tsunami alert has been given for the area. Higher waves than normal may also reach North Celebes and the Northern Moluccas in Indonesia.