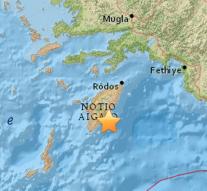 athens - Over 50km south of the Greek holiday island of Rhodes, an earthquake with a force of 5.0 occurred on Friday at the beginning of the evening. That has announced the European Seismological Center EMSC.

The epicenter was closest to the island of Lardos. EMSC estimates that more than half a million people in the area felt the shock. There are no reports about victims or damage.