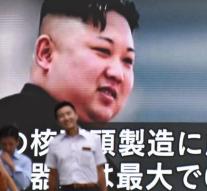 seoul - In the northeast of North Korea an earthquake was measured with a force of 6.3. The quake indicates that North Korea has conducted a new nuclear test, reports the South Korean press office Yonhap.

Earlier convictions found in the communist country were also the result of nuclear tests. The quake took place near the Punggye-ri nuclear weapons test area. It would be the sixth nuclear test conducted in North Korea.

According to China's seismological institute, the quake had a force of 6.3 and a depth of less than a kilometer. There could also be an explosion.

Earlier this day, the North Korean state press office KCNA claimed that the country had developed a new hydrogen bomb. The bomb could be carried by an intercontinental ballistic missile. According to the medium, North Korean leader Kim Jong-un was present on the loading of the bomb in a long-haul race.

That happened during a visit by Kim Jong-un to the Nuclear Weapons Institute. 'The institute recently succeeded in developing a sophisticated nuclear weapon that has a' great destructive power ', according to KCNA.