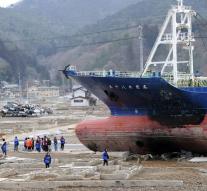 - An earthquake with a magnitude of 6.1 on Tuesday measured at 384 kilometers southeast of Japan's main island, Honshu. The quake was registered by the United States Geological Survey, a federal scientific institute in the United States.

In March 2011 caused a quake with a magnitude of 9. 0 to 370 kilometers northeast of Tokyo on Honshu for a tsunami. Approximately 16 000 people died. The material damage was considerable. Include the nuclear power plant in Fukushima was severely damaged.