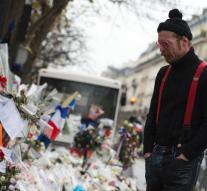 - The Eagles of Death Metal are Tuesday to go along at the Bataclan Theatre in Paris, where they were fired on 13 November. ITV reports that the men went to the theater to lay flowers.

On the website of the news is a picture of the men. ITV writes that the band members took the time to look at the flowers and the notes, which have been left at the concert hall, read. Existing media asked frontman Jesse Hughes even if he could describe how he felt, but the artist did not respond. ITV reports that he was quite emotional.

The Eagles of Death Metal were Monday again on the podium in Paris. The men joined U2, the band gave a concert Sunday and Monday in the French capital.