Home / World / Duterte to Obama: 'Shut up, you bastard' 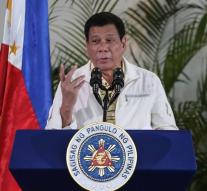 - The controversial Philippine President Rodrigo Duterte, US President Barack Obama warned not to mention word of extrajudicial killings by the Philippine government. 'If you do, I cuss you out, asshole.'

The two presidents will meet this week at a regional meeting of Asian leaders in Laos. Duterte said Monday at a press conference that he is the president of an independent country and only accountable to its own people.

When asked by a journalist how Duterte will explain the deaths of hundreds of drug offenders to Obama, he replied: 'Obama should respect me and should not subject yourself to a question fire.' The Philippine president then addressed directly to Obama: 'If you do, I cuss you out, asshole. '


The number of suspected drug offenders that slain since the arrival of Duterte in the Philippines has risen to more than 2,000, appeared last week. During his election campaign and when he took office on June 30 Duterte announced that it will embark on a desperate struggle against drug crime. During that campaign fiercely criticized by human rights organizations alleged criminals are now in droves.