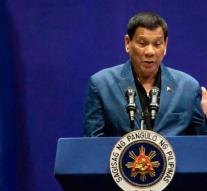 manila - The Filipino president Rodrigo Duterte has threatened the prosecutor of the International Criminal Court with arrest when she goes to work in his country. According to the president, the Philippines are no longer members of the ICC, which is therefore no longer entitled to carry out investigations in the country.

ICC prosecutor Fatou Bensouda announced in February to start an investigation after the complaint of a Filipino lawyer. He had accused Duterte and his policymakers of crimes against humanity and the policy to kill criminals.

'What authority do you have now? Why are you in this country, if we are not members of the treaty? 'He told the media in statements addressed to Bensouda,' You can not do research here without permission, and I'll have you arrested. '