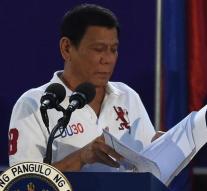 - The controversial Philippine President Rodrigo Duterte personally ordered the mayor not only criminals but also to murder political opponents. That showed a former member of a death squad yesterday during a hearing before the Senate, which was broadcast on television. Duterte was in his time as mayor of the city of Davao in this way have had slaughtered some 1,000 people.

The 57-year-old Edgar Matobato stated under oath that he was part of the Davao Death Squadron part, a very notorious group which would be responsible for hundreds of murders."

'Our job was to kill drug dealers, rapists and thieves,' he said. But the former militieman said Duterte's political opponents were also targeted, including four bodyguards of a rival for the mayoralty, Prospero Nograles.

In 1993, an employee of justice was injured by the actions of the death squad in a fight at a roadblock. "Mayor Duterte was the one who killed him. Jami Sola was still alive when Duterte arrived. He shot two Uzi-empty warehouses on him."

Matobato declared itself to have about fifty kidnappings and murders on his conscience. Victims were shot or strangled. Some were dumped into the sea to be eaten by fish. Their abdomen was cut open so they would not float to the top. In one case, a dead man was even fed to a crocodile. They were slaughtered like chickens.

"He also said they have heard give Duterte ordered to bomb a mosque in Davao in retaliation for an attack on a cathedral.

Matobato also said the protection of witnesses is no longer to be trusted since Duterte president. He is now in hiding in fear for his life.

Led by one of Duterte's biggest critics, Leila de Lima, the Senate committee investigating the extraordinary increase in the number of murders in the Philippines. In the last ten weeks are definitely 3 000 people were killed. According to police, 58 percent slain by unknown and the rest in legitimate operations of the authorities.

Duterte was able to settle in his 22 years as mayor with the high crime rates in the city. It made him popular in the Philippines, which has one of the highest murder rates in Asia, and earned him his nickname "The Punisher" on.

"After his victory in the presidential election this year, he declared war on drugs and criminals in the country. "If you destroy my country, I will kill you," he swore in front of a crowd of cheering supporters.