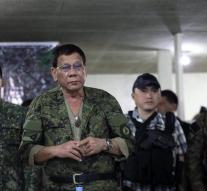 manila - In the Philippines, Islamists in the beloved city of Marawi have about three hundred hostages in their power. That said President Rodrigo Duterte Friday after a visit to the troops there.

In addition to the ongoing military effort, there is no major liberation action on the program. Otherwise, the Islamists could possibly begin the execution of hostages. If necessary, we have to wait a year, he said.

The fighting between government forces and the Islamists in the South Philippine city of Marawi, about 800 kilometers south of Manila, has been two months. Since then, more than six hundred people have been killed. About the number of inhabitants hosted by the Islamists, different numbers always make the round.

Last Saturday, the Philippine parliament voted for an extension of the state of siege, which applies to all of Mindanao. Duterte had declared the measure in May, which is now valid until the end of the year.