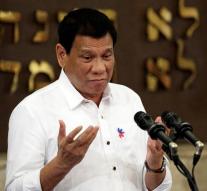 - The Filipino leader Rodrigo Duterte has Barack Obama Tuesday again insulted. He said the American president ' can go to hell '' and that he cares not that the US his country wants to sell weapons, because Russia and China, who will be happy to deliver. ' I break with America, '' Duterte had also passed away. What he meant exactly, was not clear.

Washington has reacted with astonishment at the latest tirade from the Philippine president. ' Frankly, it seems rather contradictory to the warm relationship that exists between the Filipino and American people and the importance of our cooperation. That continued when Duterte came to power, '' said John Kirby, spokesman for Foreign Affairs.

The White House has not received any official reports from Manila. According to insiders, the tendency is the rhetoric of Duterte would ignore possible to provoke any escalation in this part of Asia, where growing Chinese influence.