Home / World / Duterte: do not participate in investigation executions 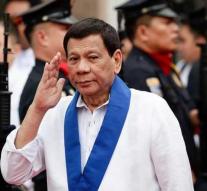 manila - Filipino President Rodrigo Duterte has called on police officers and soldiers not to cooperate in international investigations into extrajudicial killings in the Philippines.

Since Duterte came to power in 2016, more than four thousand people have been killed by police brutality. Hundreds of drug users and dealers have also been shot dead by strangers. The International Criminal Court (ICC) in The Hague announced a preliminary investigation into violence at the beginning of last month. A special rapporteur from the United Nations also conducts research.

Duterte said he would welcome both inquiries, but came back in a speech for police officers on Thursday: 'When it comes to human rights, whoever the rapporteur is, my job is yours: do not answer and pay no attention to it. '