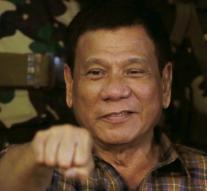 - Philippine President Rodrigo Duterte, also known for his outbursts toward US President Barack Obama, does not mind being compared to Hitler.

Duterte said after a visit to Vietnam in a muddled speech that he was called a \'cousin of Hitler.\' He was referring to the millions of Jews who had murdered Hitler and then said, \'There are three million drug addicts in the Philippines. I'd like to slay them.\'

And subsequently \'If Germany had Hitler, the Philippines...\' And then he pointed at himself.

Duterte was elected in May as president after he promised to rid the Philippines of the drug problem. He started on June 30, as president and have since killed 3,100 people, mostly drug users.