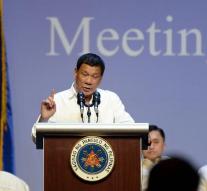 manila - Philippine President Rodrigo Duterte has once again lashed out at the United States. He said after returning from a visit to Cambodia and Singapore that major ally itself but should prepare to withdraw from the agreement on the stationing of troops and equipment for military exercises.

The patronizing he sat on his violent approach to the drug problem. 'Bye-bye America,' said the ever boisterous leader. 'We do not need your money. '

Duterte, however, also said weather could be anything else about a month. He loves namely does the big mouth of Donald Trump. 'Yes, Mr. President, that looks like mine. We attract a lot of similarities and people of similar backgrounds together. '