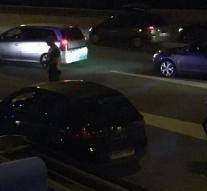 barcelona/perpignan - A Dutch bus driver and a tour leader of Solmar Tours witnessed the violent arrest of three men at the Spanish French border on Saturday night, which could be caused by the attacks in Barcelona and Cambrils.

They were at the first grade when 'out of the way' a piece or ten members of the Guardia Civil, armed with carriages, surrounded a white box of the Peugeot brand.

The men saw how the heavily armed police officers opened the door of the cargo area. 'There were two men on the ground,' said travel leader Pascal. 'They were pulled out and struck in the buoys. The driver of the van was vehemently opposed, but he was also overtaken. '

Read more in the paper newspaper of The Telegraph (Monday).