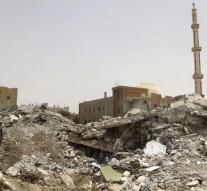 - A 23-year-old Dutchman has joined the Kurdish warriors in Syria. Baran Sason (a hiding name) is preparing for the battle of Raqqa, the self-proclaimed capital of the Islamic State Caliphate. 'I'm here for the battle and getting to know the Kurdish language and culture,' he says to the AD. The newspaper knows its real name, but does not publish it for its safety.

'Baran Sason' is not the first Dutchman among the Kurds. Also three members of the motor club No Surrender and ex-military Jitse Akse had joined the rebels.

'Baran Sason' was previously involved in the Right Sector, an ultranationalist anti-Russian group from Ukraine. 'In the West, people have nothing to live for, and therefore they have nothing to die for,' says the young Dutchman.