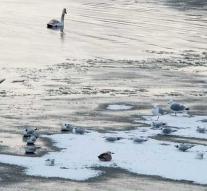 brugge - A 74-year-old Dutchman from the Belgian Beernem was brought to a hospital in a critical condition Wednesday afternoon after he had made an unfortunate fall on the ice and then sank through the ice. The accident occurred in the Assebroekse Meersen nature reserve near Bruges, the Public Prosecution Service in Bruges reported.

According to Belgian media, the man would not have been in the water for a long time, but would have suffered serious injuries because of his fall on the ice. It is unclear whether the victim was skating.