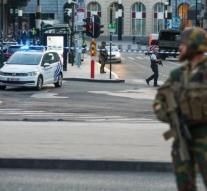 brussels - The press office Reuters conducted the Dutch witness Paul de Vries, who stated that he had seen how the police carried a detainee at the Brussels-Central station. It is not clear whether it was the man who had previously shot down by soldiers.

It is still unclear how the suspect is allowed. Service age was estimated by a Belgian witness in about 35 years. In and around the station it is quiet. The police monitors the deposition and is stolen from some distance by some bystanders.

SEE ALSO: Man switched off after explosion at station Brussels-Central

The authorities must formally determine whether there is terrorism. They decided that the official threat level will not be increased and maintained on three on a scale of four.