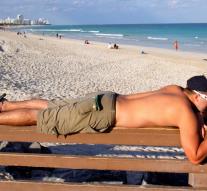 - Since this year, the cost due to interference of the European Union on the Internet and greatly reduced calling abroad. Anyway Dutch little people there use.

Research by Tele2. namely shows that many Dutch still seem to be afraid that their account fails unexpectedly higher and not to come surprises, put six out of ten Dutch their mobile data when crossing the border.

There are fewer and fewer people who find it delicious just on holiday to be disturbed by the appeal of their phone. The survey shows that 68 percent of Dutch people like to use the internet on their phone or tablet when they are abroad. It will also make use of hotspots and free wifi in public places such as shopping malls and restaurants. Approximately 75% of the holidaymakers appear to do so, compared with 16% in 2011.


Why would you pay for data usage when you can pick up free wireless internet in the hotel or on the road? Nevertheless, it is advisable to be selective. There are several reasons for that. First, it is often required to sign in with your phone number and / or email address. This information can be used later to send spam or advertising, where you're not waiting.

Disadvantage is that these free services are often slow, so it takes a long time a page is loaded, and watch a TV program is often not possible. Not to mention the often unprotected hotspots that make it easy for cybercriminals to get to your data in your phone.

You putting your mobile data if you cross the border? What are your experiences with accounts etc. nbsp;