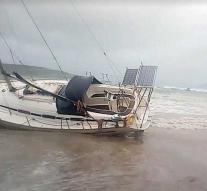 pylos - The storm Zorba has reached the Greek west coast, but the consequences are- given the ominous expectations-, Greek media reports, although there is damage to the coast.

The storm caused local nuisance in the extreme southwest of the Peloponnese peninsula. The storm with wind speeds of 90 kilometers per hour was less severe than expected according to meteorologists from the Greek National Observatory.

Dutchman Robert Vons lives in Archaia Epidavros, on the north coast of the Peloponnese, and sees that it is storming violently. 'From this morning on there is heavy rain, with occasional thunderstorms', says Vons.

'There is not much wind. In that respect it is quiet. Most of the nuisance will come from the rain, I think there will be flooding, here and there damage. I have the Greek TV on and in the south it is raging. Nice what fishing boats have been killed. '