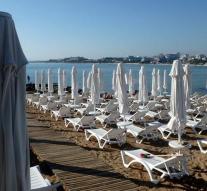 - "The expenditures of Dutch tourists in Turkey, Greece and Switzerland have declined sharply in the first half, the Central Bureau of Statistics reports (CBS). In Turkey and Greece was not even spent so little in the past decade."

"Turkey some time plagued by terrorist attacks and more recently by internal disturbances. Spending there are now totaled 81 million euros, representing an annual decline of about 40 percent. The Greek coast is the scene of the refugee crisis. Here spending dropped to 122 million euros, more than 195 million in the first half last year."

"In other countries, the Dutch spent just a little more off. This was the case in Austria, Spain, France and Germany. The increase in spending that made the downturn in Turkey, Greece and Switzerland almost entirely good. The total travel expenses of Dutch abroad were in the first half lower than a year earlier, 5.2 billion instead of 5.3 billion euros."

"Germany by far remains the most important destination. Almost done a quarter of all foreign travel expenditure was in Germany. That our eastern scored so high partly because Dutch often go on day trips to Germany. There are also many over the border shopped."