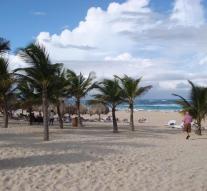 punta cana - The latest Hurricane Maria, now Category 5, is heading straight to the popular Dominican resort of Punta Cana. Thursday this busy tourist spot with dozens of luxury hotels is expected to be severely affected.

There are now a few thousand Dutch people. Many wait in fear and tremble at what's going on, especially with the ravage on Sint Maarten in mind, so the first signals sounded.

Dutch travel organizations like TUI and Thomas Cook are trying to reassure them. 'In the Dominican Republic they are used to hurricanes. Most hotels have solid shelters and everyone knows exactly what needs to happen, 'says Hanita van der Meer from Neckermann Travel.

TUI is watching Petra Kok from day to day. 'We fly twice a week from Schiphol to Punta Cana, Friday and Monday. We are alert. If necessary, we move on to evacuation, but it is not yet. On the beaches everyone is enjoying a well-deserved sunshine, 'she said last night.

Meanwhile, the five thousand inhabitants of Saint Eustatius and Saba abolished before the arrival of Hurricane Maria. The smallest Caribbean islands from the Dutch Kingdom seem to get a tap of the storm that has already grown into power five, the heaviest category.

After Irma it means again all hens on deck. 'At Hurricane Irma, ten people lost ten people lost the roof of their house,' said Teena Lopes, spokeswoman for the tourism bureau in Oranjestad. 'Now we have to prepare ourselves again. 'Maria will probably pass south of the islands when it is Tuesday in the Netherlands.

The more than three thousand inhabitants of Saint Eustatius are particularly busy cleaning up the litter that left Irma's windswind. So that loose parts do not reside and damage cars. Also the ravage of cars on St. Maarten- from broken windows and lights to huge dents- was caused by flying-flying material.

'There are many branches that have been woven out of trees during Irma,' Lopes knows. The office of the tourism bureau in Fort Orange is also shut down. 'So all our materials remain well protected. ''

Both islands are not much more than a sleeping volcano rising from the Caribbean Sea. Around it is an airport, a port and some residential areas. Dutch marines have been sent to the islands from Saint Maarten to provide any first aid.