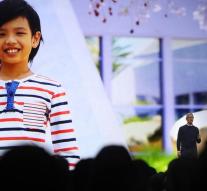 - Every year, Apple writes a talent contest for students and students. The winners may attend the WWDC, the developer's conference, to gain knowledge. This year was the youngest participant, the 10-year-old Yuma Soerianto from Australia, but from the Netherlands a delegation also traveled to San José.

Who are those young people who knew Apple to convince their talent and were rewarded with a WWDC 2017 ticket and free stay in the United States? And what did they learn there for the future?

Time attempts to help students avoid emancipation by smart intuitive design and artificial intelligence that helps you work as efficiently as possible. I built this with an American friend I met at previous WWDCs.

'I've already started some of the new technologies. I am very interested in artificial intelligence and now that Apple offers some techniques easy and optimized, I expect that I can do even more cool things in my apps. In addition, I also gained a lot of new inspiration. '

This app I made for the camp of my uncle and aunt.

How did you qualify for the WWDC?

'I've made a Chinese Dammen game, this is a board game for 1 person, where you have to play the board empty by jumping over each other (just like in dams) and finishing with a pawn in the middle of the board. '

'There were, of course, a lot of fun things, but I think the one thing I thought was the Bash where Fall Out Bou performed. And in second place, of course, the Keynote! '

Unfortunately, I do not have any apps in the app store yet, but I am (definitely after WWDC) planning to get one in the App Store soon.

How did you find your first WWDC?

'It was very cool to hear that I had to go to WWDC. In previous years I watched the live broadcasts of the Keynote, but now you could also experience them (in real life). '

'I've experienced the WWDC as a very fun and educational week. Firstly, I was very pleased to see that a great and cozy atmosphere could be created at such a great conference. While you were waiting in line or for one of the many sessions, there was always someone next to you who started talking about WWDC. '

It's an app where you can see who won a WWDC Scholarship in a particular year and contact them. We wanted to build a community for all winners in 2015 to keep in touch with each other after a nice week. We're currently working on the 2017 version of the app.

'I learned from the workshops that it's smart to keep more on accessibility to your apps. Think of Voice Over (read everything on your screen) or Dynamic Text (that you can enlarge the font for people who are less likely to see). '

I've created some apps that are now in the App Store. The latest one is #Trumpify, which allows you to automatically paste different Donald Trump movies so that he says exactly what you want.

How did you experience the WWDC?

'Compared with 2015 (the last time I was there), the WWDC has become much more professional. This had something to do with being two years older now. I noticed that this time I was very focused on networking and meeting new people, something that I totally did not work with two years ago. I also had more of it. I am busy with many larger projects now, which also has bigger issues, these questions can make you much easier with the WWDC. '

'Meet all the youth there who have also won a scholarship. Hopefully, there will be many collaborations and new apps. '

'At the latest design session, it was told how to make prototypes very easy with Keynote. This is unclearly a lot of time because you can already test before you create an entire app. '