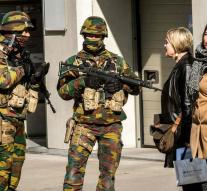 leeuwarden - Several second-year students from the NHL University (NHL) are for safety firmly in the European Commission. They are part of a group of a total of 57 students and four teachers of the courses Integral Security and Public Administration who are on study tour in the Belgian capital.

The group of the Public Administration was in the European Commission.,, They now sit still, '' says director Danny Buma of Thorbecke Academy, part of the NHL where the training covered.,, Once they are allowed to leave the building, they come to the Netherlands. ''

The other group of students sitting at the edge of the city in the NATO building. According Matthijs van Vliet (21), student Integral Security, his group in the bus on the way to the NATO building when they saw running around the Grote Markt people from a subway station.,, Those people were crying and in a panic. ''

Strikingly, the fight against terrorism one of the aspects of Van Vliet's study. Therefore,, it was a shock and it was scary. But it was not so bad because we ourselves receive lessons in counterterrorism. ''

The school reports that there had been contact with other trainees and staff who stay in Brussels. They are also, according to the spokesman safety.