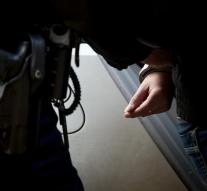 istanbul - The Turkish police, with the arrest of eight suspects, two of whom have Dutch nationality, have wound up a big drug gang. According to Turkish media, the police found 773 liters of acetic anhydride, a chemical used for heroin production. The stuff would have been imported from the Netherlands.

The police collapsed in Istanbul, Ankara and Antalya and took over the commodities. The newspaper Habertürk wrote that the drug catch has a value of about 33 million Turkish lira, 8 million euros. According to the newspaper, the Dutch suspects Aydin K. and 'Van der E.'