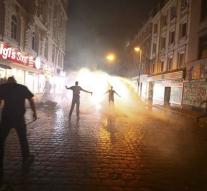 hamburg - A 21-year-old Dutchman stands before the court in Hamburg on Monday for his share in riots in the North German city. These irregularities took place in the context of the G20 summit, beginning of July.

According to the Hamburger Morgenpost, it is about Peike S.

During the violent riots the man would have thrown two bottles to a police officer. In addition, he is suspected of opposing his arrest. According to the German broadcaster NDR, the Dutchman was involved in bringing the courtroom. There he could count on the loud noise of the audience.

The man has been in forearm since July 7th. He did not speak a word during the treatment of his case. He was accused of inflicting dangerous bodily injury and opposition to the police. He can be sentenced to a maximum of two years. Monday afternoon another agent will be speaking. When the pronunciation is not known yet.

The Dutchman is certainly not the only defendant. In total, the German justice has accused 109 riders of whom they have the identity.

The G20 met in Hamburg on 7 and 8 July. It was restless in the city for days. On July 7, the police already had 111 injured agents. The German newspaper Bild keeps the total number of injured police people in almost five hundred.