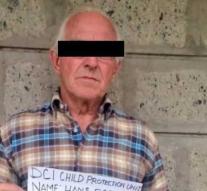 nairobi - The Dutch pedophile Hans V., who is stuck in Kenya, paid his victims money. That says the Kenyan Public Prosecution Service (OM). The mothers of the children he would have thought that...

The victims are girls between the ages of eight and fourteen. The 69-year-old Dutchman would have abused them between 2011 and 2014. According to the OM of the African country, V. paid 100 Kenyan shillings, which is equal to 86 cents. When the girls went to the police, V. would kill them.

Hans V. was arrested late last year. The man has been associated with sexual abuse before.